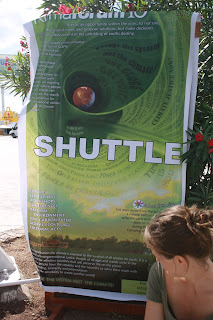 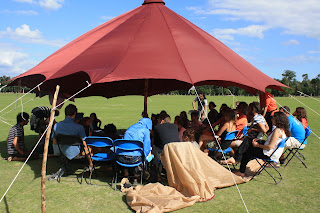 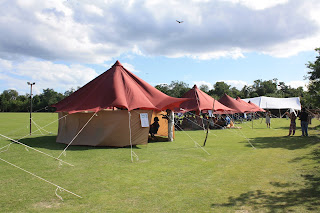 Going off word of mouth directions, we were looking for a 7-11 in Puertos Morelos. The only 7-11 we had so far encountered was one off the highway which seemed to be the center of exchange for ADO buses from the airport to the taxis and local route bus lines. After asking some shop owners in downtown Puertos Morelos, it turned out that was the only 7-11 in town. 20 pesos and a 5 minute cab ride later, we were waiting on the side of the 7-11 in front of a Klimaforum sign for some to-be known vehicle to pick us up.

About 30 minutes later our ride arrived – a dusty silver astrovan blasting conscious hip-hop from the states, and out came three people heading back to wherever. We got in with two Spanish speakers and a woman named Justine from an NGO in Brooklyn who was documenting the spread of industrial agriculture in the developing world. I was intrigued and excited for what was to come.

2.5 km from an ecopark boasting caves, ziplines, and crystal clear pools of natural springs was El Rey, which is a polo club. Ironically, the Klimaforum was hosted in the latter. We registered our names and emails, paid 10 pesos for the shuttle and began to explore the modest and seemingly quiet counter-UN event. On the gate entrance was the schedule for the day. It was about to be lunch and after that we decided to hear a presentation about how organic farming is, and should be, the saving grace for climate change mitigation as well as adaptation.

The feeling of the event was worlds away from the COP. The entire event was open air, side-events or workshops held in party tents on a large turf field, open-air café and stage that doubled as blogger’s post with wifi up until 5:00pm. The energy slower friendlier, and more communal; every one ate the same 40 peso ($3.50 USD) meal of rice, kidney beans, roast potatoes with veggi-sausage, and cilantro lime shredded carrots. English and Spanish mingled in the air and people of all walks, including young children, talked and ate together or ran around the field.

Simone and I walked around the inner perimeter of the field listening to the sounds of birds and we checked out the Meshwork:

The Meshwork is an interactive diagram that places important epicenters of change needed to prevent the destructive forces of climate change. Next to those epicenters were cards that described specific actions needed to see those changes. The idea then is that the connections made can be taken home with you by registering at the website www.2020climatesolutions.org which will connect you to similar people in your local area.

All in all it was quiet, calm and free spirited. Though not dull, there were many vibrant people who were looking for alternative roots to enacting changes, ones were they had more of a voice. Ironically though, it didn’t have a format all that different to the COP. There were some more spiritual activities like drum circles and dances for the earth, but the bulk of the experience was simultaneous hour and a half presentations.

I had later learned that the alternative forum experienced a rift as those from the Klimaforum received government funding for their event, those wanting a process completely exterior to the state formed the People’s Dialogue, though equally as elusive to find, but apparently more radical.

Sam Bosco
Ithaca, NY, United States
I am a Cornell University graduate student looking deep into the implications of climate change, specifically how it relates to how we provision food, its implications on social justice and its impacts on the earth's ecosystems. Stay tuned for updates on all things Cancun, climate change, and alternative as well as status quo options for the future